The Danger of Being Profitable

Ashley Cooper's business was about to go under. 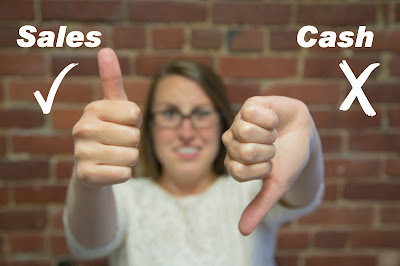 Only one problem: He didn’t have the money in the bank.

If the staff at his firm, Canada’s Paladin Security, cashed their cheques (this was in the mid-
1990s), the business would be so overdrawn it would have to close.

There was no one to lend him the money. He lay awake all night, certain he was about to lose everything.

Luckily, this story has a happy – and somewhat miraculous – ending.

That very day, several clients paid their overdue bills. Cooper quite literally ran to the bank, and was able to pay his staff.

“It was our biggest deposit ever at that time,” he told The Globe and Mail newspaper 20 years later. “Sometimes there’s a great white light that shines on people.”

So how did Cooper get into so much trouble?

His business had been growing so fast and was so profitable, that he just assumed he didn’t have to worry about money. Paladin invoiced late, didn’t follow up on late payments and paid all its own bills on time, whether or not they had the cash.

When its customers’ cheques failed to materialise, the company nearly closed.

It’s an important lesson for every business owner.

Lots of sales does not necessarily mean that you have money in the bank!

It’s really easy to get complacent if you’re profitable.

But some of your clients may regularly take 60 days to pay you. And you always risk dealing
with customers who either cannot or will not pay.

If, in the meanwhile, a big VAT bill arrives,

…or if you have splurged on several big pieces of equipment,

….or just opened a brand-new office,

As CEO, you need to be constantly aware of how much money is coming in and out of your company. Make sure you know when customers are due to pay you, when you’re expected to pay bills and when there might be a gap between the two.

That way, if you forecast a shortfall you can act to avoid catastrophe, for example by negotiating more favourable payment terms with your suppliers or shifting payment dates.

Look at your cash flow statements on a weekly, if not daily basis.

Now, I know that more than likely, the sight of a spreadsheet causes you heart palpitations…. You are uncomfortable with numbers…. And your accounts may as well be written in Chinese.

But don’t delegate this task.

Running out of cash is the number one reason why businesses fail.

And it happens the whole time to businesses whose CEOs were sure they were safe, because they were profitable.

As a direct result of his experience, Cooper hired a finance director, instituted strict credit control and increased the line of credit with his bank. With good cash flow and proper financial systems, Paladin’s growth was much smoother. Nowadays, it turns over more than $1 billion a year, and is one of Canada’s leading firms! Asking for help when your business is distressed isn't an admission of failure. It's the smart sensible thing to do, if you're to save your business.

Prepping for the Coronavirus

Why waste time on pandemic threats that never amount to anything? The chance is low but you may experience disruption due to the Coronavirus. Be prepared...

My annual tradition to share some of my favourite presents to give some last minute inspiration.